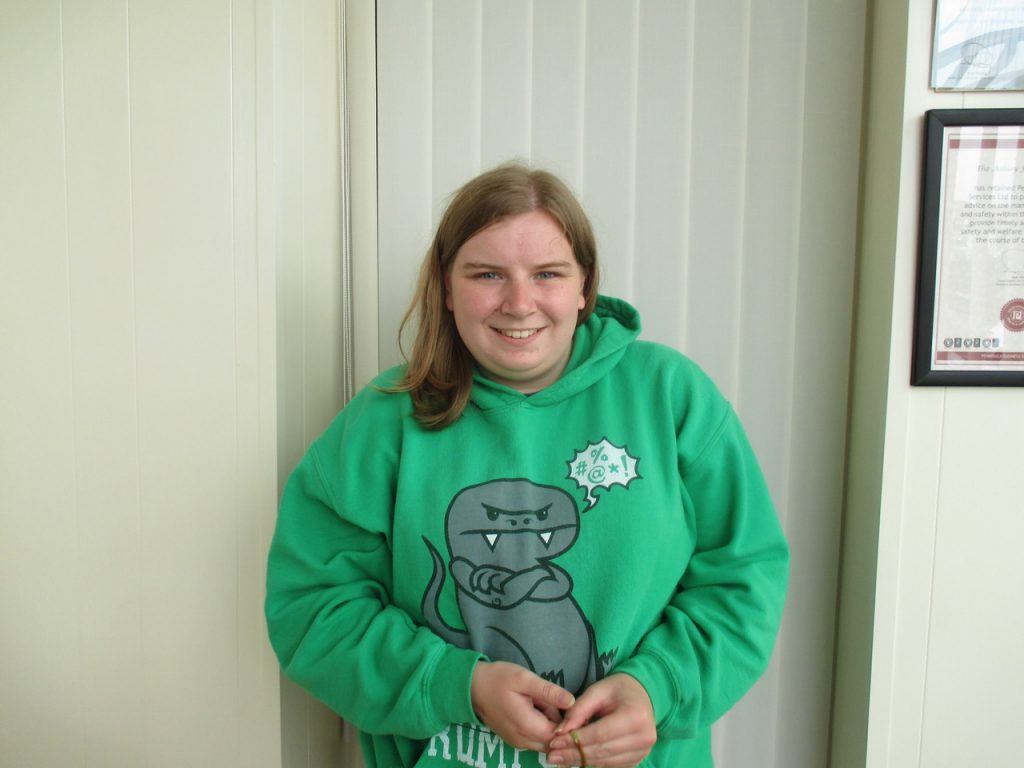 After a troubled childhood, Lucy one of our young people is now on the road to success with aspirations of becoming a teaching assistant. Lucy has defied all odds and rebuilt her life.
At just 21 Lucy tried to take her own life by jumping into the Sea in Blackpool.  This was an unfortunate situation that developed from an argument with her mum who had struggled with mental health issues. Fortunately, Lucy was one of the lucky ones and was saved by the emergency services team that night.Soon after and under the care of the NHS mental health team she was referred to a unit in Lancaster. It’s here that she started her road to recovery. During her time at Lancaster Lucy received ongoing support and care from the NHS and local authority whilst she recovered from her truly frightening ordeal.It was in 2015 that Lucy was referred to The Ashley Foundation and thereafter took up residence in Elm House, one of the hostels that provides ongoing support and advice to help residents rebuild their lives.At first Lucy found it difficult to engage with any of the support workers. A closed book she spent a long time resisting the support she so desperately needed. Gradually over time and with the support of Denise and co-workers Noel and Dean, Lucy was encouraged to leave her room at Elm House to venture downstairs to eat and engage with other residents.When Lucy arrived at The Ashley Foundation she wore a green hoodie (pictured). The hoodie is symbolic to Lucy’s story as she refused to remove it and protested against wearing anything else for such a long time. Lucy eventually came around to the idea of discarding the jumper into the bin and this symbolised a turning point whereby she accepted her situation and decided that it was time to move forward.

As time went on and Lucy began to open up she agreed to take part in a 12-week course from The Prince’s Trust. The course focused on helping individuals uncover their hidden talents by improving their confidence and from this they gained a nationally-recognised qualification. Whilst in attendance Lucy met new people and built friendships. She came away invigorated with a new found confidence and a desire to turn her life around.

For Lucy all was not lost and this gave her the strength to push forward.

On her return Lucy took the next step on the road to recovery by moving into one of The Ashley Foundation’s move-on flats this happened in May 2016. Also at this time she was discharged from the NHS mental health programme. Working with the team at The Ashley Foundation Lucy enrolled at Blackpool and the Fylde College. There she went on to complete level 1 & 2 in Health and Social Care and secured a position within this profession where she still works today.

The move-on flats provided Lucy with the independence she needed. Knowing that her support workers were only a call away should she have needed their help or advice was a great comfort.

In November 2017 Lucy was thrilled to move back home and make a new start. Against all odds Lucy rebuilt her relationship with her mum and they now enjoy spending quality time with each other.

In her spare time Lucy volunteers at her local Rainbow and Brownie groups. Her family, friends and colleagues have all seen a huge change in Lucy and have commented on her confidence and her ability to get what she wants from life.

When speaking with Lucy she commented ‘The Ashley Foundation literally saved my life. They picked up the pieces and helped me rebuild my life and for that I’m eternally grateful’.

For further information about The Ashley Foundation visit http://tafblackpool.org/