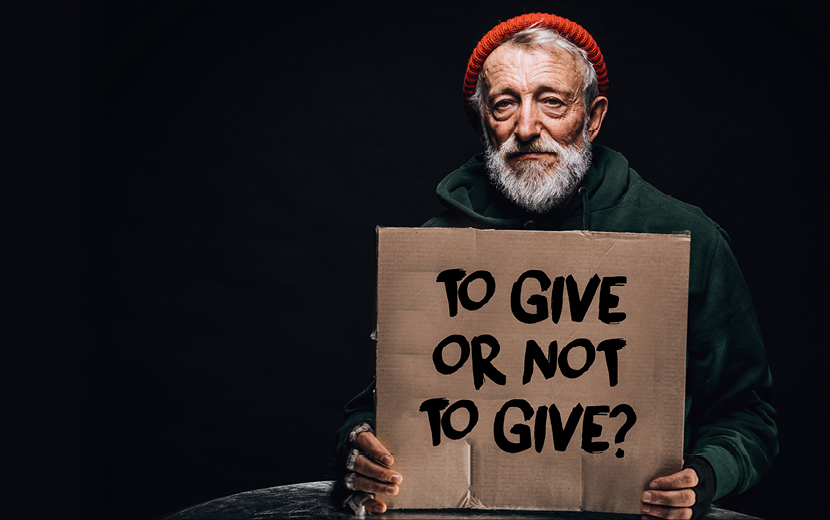 As homelessness hits an all-time high in the UK, more and more people are reaching out to try and support those people who live on the margins of our society and while the public is increasingly aware that thousands of homeless people are forced to spend their nights in the cold, there remains confusion about how to help homeless people.

In an attempt to make sense of all sides of the argument, we’ve taken a look at what’s being said in a bid to help you make an informed decision.

Taking into consideration the views of both charities and homeless support groups, the advice is still mixed. While some suggest against giving money directly to rough sleepers, warning that it can fuel their drug and alcohol addictions, other groups say giving money is often essential to helping homeless people buy the bare necessities.

Born from the streets of East London, the Salvation Army warns against handing money to the homeless. The Christian Charity, which offers emergency accommodation on a night-by-night basis states that it risks ‘trapping’ people with an endless cycle of homelessness and rough sleeping.

However, Jon Glackin, founder of Streets Kitchen, who has also been homeless himself told The Independent that the best way to help rough sleepers is to give them money directly and that drug and alcohol addicts make up an absolute minority of homeless people.

National charity Crisis, who help people directly out of homelessness and campaign for the need to change, don’t share much of an opinion of whether or not to give. Matthew Downie, head of the charity said in a recent interview that whether or not people give money to beggars is a personal decision and that not everyone who begs is homeless and not all homeless people will beg. The point of the matter is that these people are living in extreme poverty and need our help.

Whilst we know that homelessness is not a lifestyle choice, heck it’s barely a life at all. In most cases, homeless people are mortified to be begging in the first place, with some choosing to go hungry over begging for money. Who are we to judge, anyway? If people choose to give surely it’s because they choose the act of giving in the first instance and therefore we should not concern ourselves with how it will be spent? In a recent article, the New Statesman America journalist Matt Broomfield said “If your money funds the final hit, accept that the person would rather be dead. If your act of kindness makes him wake up the next morning and decide to change his life, that’s nice but not your business either.” We choose to give because we want to, and who is anyone such as the government, charities or individuals to tell somebody that what you are doing is wrong?

People are homeless for a number of reasons; as a result of fleeing domestic violence or sexual abuse, loss of a job and a partner often at the same time, leaving the care system with scant resources and being severely mentally ill – to name a few.

Tamsen Courtney, a journalist for The Guardian, wrote a featured article recently stating that no one in their right mind thinks it’s a clever scam to sit on a freezing pavement suffering the humiliation of asking people for a few coins.

A throwback to 2016, when Nottingham City Council produced a series of hard-hitting posters telling the public not to hand over their cash to beggars. Their rather abrupt way of dealing with the situation, subsequently this resulted in the posters being banned by the Advertising Standards Authority as they were deemed to reinforce ‘negative stereotypes’ and could cause offense. Whichever way you look at it the idea that homeless people can’t be trusted is intolerable. These people are human beings, some successful businessmen and women, with families who for some reason have fallen on hard times. It’s only a minority of individuals who grew up on the streets.

So what’s the alternative?

Evidence suggests that we should donate money to a homeless charity. Therefore, by giving donations to homeless charities, you are ensuring that the money is being spent in the right way. Not only are you contributing to helping the homeless today, but you’re also helping to support them in the future.

Local Support Workers from national and local charities are usually aware of the rough sleepers in their area. So in most cases, rough sleepers will have some access to food daily and warmth during times when conditions are bitter, causing temperatures to plummet. However, if you are worried about someone sleeping rough, there are a few things you can do to help. Buying a hot drink, some food or warm clothing like socks for someone sleeping rough can make all the difference.

There is help out there and with the government’s latest pledge of funding, following a nationwide strategy that was announced in late 2018, more services are becoming available all the time.

Crowdfunding projects like Beam in London are now also quite popular. Beam is an online platform that crowdfunds employment training for homeless people. Working closely with charities such as Shelter, St Mungo’s, Thames Reach and The House of St Barnabas, they refer homeless people who are ready to train and work.

You’ll find that there are lots of local projects and initiatives that exist in your local area that go towards helping to support the homeless community – you’ll just need to search to find the one that’s closest to you.

In summary, you’re neither right or wrong in giving a homeless person lose change. It’s down to a person’s own individual preferences, our evidence presents an argument for both sides and provides other alternatives to handing out cash. If you’re passionate and want to help, you could consider volunteering or fundraising for your local homeless shelter.  Whichever option you choose, you’ll know that you’re helping to make a difference to the lives of others.