Why do people become homeless?

There are many reasons why people find themselves homeless. Relationship breakdown, domestic violence, young people asked to leave home, people with drug and alcohol or mental health issues who are unable to sustain an independent lifestyle or simply because someone has lost their job and they are unable to pay their mortgage or rent, each case if different and sometimes people face a complex mix of these factors.

Helping someone to rebuild relationships with family or friends, stay in education, take up employment and training opportunities or deal with their drug and alcohol or mental health problems is as much about tackling homelessness as is securing a roof over their head.

Alongside the personal issues they face, there may have been social issues or changes that have contributed to them becoming homeless or not being able to access support.

We also work with people who may face adult literacy or numeracy barriers, who may feel unconfident in the skills they have to offer, or don’t recognise the resilience and strengths they have.

All these factors together can represent a real challenge for organisations seeking to help people facing homelessness.

Sleeping rough: the most visible form of homelessness, this is when someone is sleeping on the streets –  There were an estimated 4,134 people sleeping rough in England on a single night in the Autumn of 2016. This was up by 16% on 2015 (source: Rough Sleepers Statistics Autumn 2016, England).

Homeless: not necessarily sleeping rough, but in unstable accommodation such as a hostel, B&B or another type of temporary home – 75,740 households were in temporary accommodation on 31 December 2016. 60,240 of these households included dependent children and/or a pregnant woman. There were 118,960 children or expected children within these families. (Statutory homelessness and prevention and relief, October to December 2016: England) 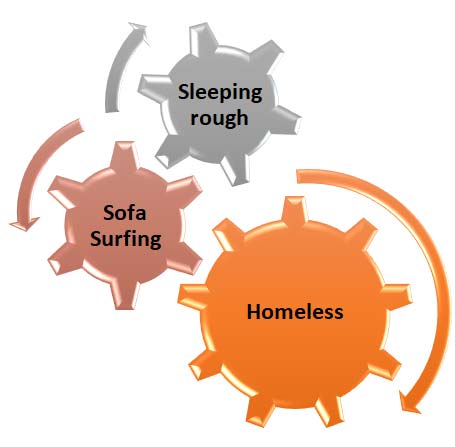 Why do people become homeless?

People who have experienced homelessness are more likely to have poor physical and mental health than the general population. Poor mental and physical health is both a cause and consequence of homelessness. Chronic and multiple health needs are common and often go untreated. Homeless people are also far more vulnerable to issues relating to alcohol and drug use. Multiple health needs alongside drug and alcohol use can act as a barrier to accessing mainstream health services, and as a result often end up using costlier primary healthcare services.

Mental health – 44% of homeless people have a mental health diagnoses, in comparison with 23% of the general population. (source: Health Needs Audit, 2016 – Homeless Link)

Alcohol and drug use – 41% use drugs and alcohol to cope with mental health issues (source: The unhealthy state of homelessness, 2014 – Homeless Link)

It is common for homeless people to have problems with benefits and employment.

Homeless claimants are twice as likely to be sanctioned and have their allowances and housing benefits cut which can lead directly to further impoverishment. Changes brought into the benefits system have impacted on particular groups of people. Combined with economic trends and higher housing costs welfare reforms have put some people at greater risk of homelessness.

Employment and the Work Programme – 88% of homeless people have previously had a job (source: Dashed hopes, lives on hold, 2013)

Universal Credit and Housing Benefit – Only 20% of private landlords are willing to rent to homeless people (source: Home No less will do, 2016)

The Cost of Homelessness

If 40,000 people were prevented from becoming homeless for one year in England it would save the public purse £370 million. In 2012 the cost of homelessness in England was reported as being up to £1 billion (gross) a year.

Costs for health care systems, including mental health services and emergency services at hospitals are high, as are many costs for the criminal justice system.

Evidence shows that people who experience homelessness for three months or longer cost on average ￡4,298 per person to NHS services, £2,099 per person for mental health services and £11,991 per person in contact with the criminal justice system. (Better than cure? 2016)

The Cost of Preventing Homelessness

Homelessness also has a human cost. The distress of lacking a settled home can cause or intensify social isolation, create barriers to education, training and paid work and undermine mental and physical health. When homelessness becomes prolonged, or is repeatedly experienced, there are further deteriorations in health and well-being. (At What Cost, 2015 and Better than cure? 2016)