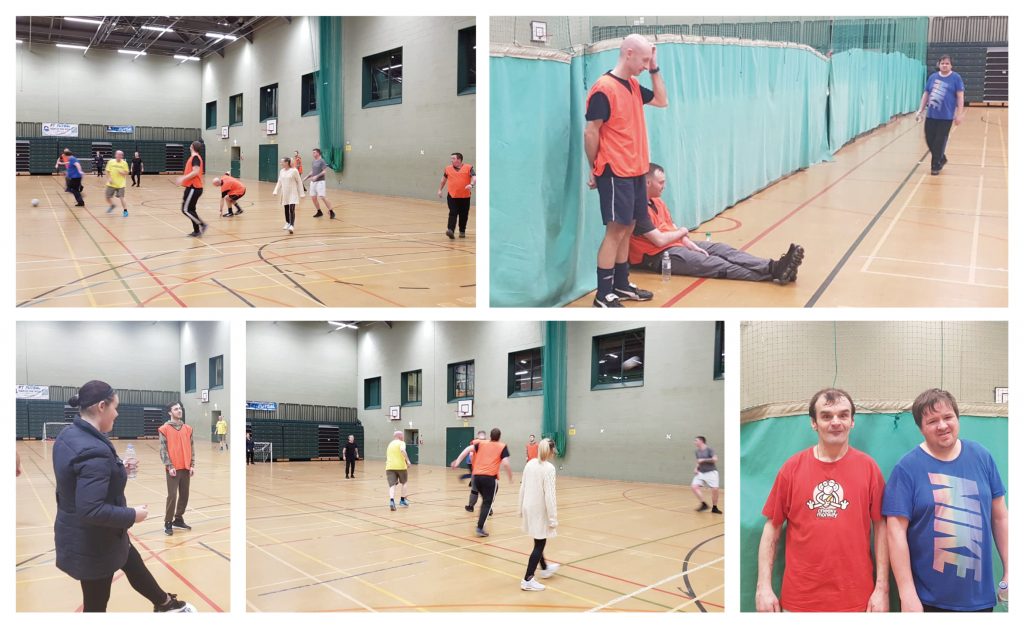 This is the second running of our five-a-side football match, the first took place in November last year when the mighty Holly House took the crown with relative ease, when they demolished the game with a combined Oak / Elm team. However yesterday, the tables were turned….

It all started on a cold, wet and wild Tuesday morning in January. As with every game attendance is often unknown. After my usual morning dash around the hostels I was convinced that we would have less attendees than last time (10 of us in November).  I was already working on the basis that we might need to run a third event to decide if this was worth sticking with, if, as I’d expected, yesterday “crashed and burned”. I was however eating my own words when the residents came up “trumps” filling two 8-seater minibuses – two from Holly and the rest a mixture of Elm and Oak (including two of our female Oak residents). I concluded that we simply have to accept that organising people is difficult and, in reality, we will not know in advance how many will turn up on the day and that eventually, one of these games will “crash and burn”, but as long as it doesn’t happen too often that might have to be deemed acceptable.

Yours truly turned into a world-class ref yet again (don’t listen to what the residents tell you). With my very own personal system of VAR – video replay for non-sporting people, which supported all decisions made on the pitch, basically whatever I say goes.

Recapping on the match it was clear to see the talent shining through, so Messi better watch out, he’s clearly got some competition from this lot.

Our winning team was made up marginally of Oak with a couple from Holly and one from Elm. This is the bit when we review each of the player’s performance, so stay tuned for what promises to be the highlight of the match commentary.

C(Oak) – after her somewhat non-existent approach to the first game (I’ve seen more action from Casper the Ghost), C participated much more fully in this game both outfield and, mainly, in net. Think she was showing off because her boyfriend was playing for the other team.

M(Oak) – agreed to come “out-of-the-blue” since struggling with a virus. Started watching on the side-lines, but joined in for the last 20-30 minutes. Actually did quite well for such a slight figure against some of the other lads.

C(Oak) – watched the entire game after threatening to come on at times. At one point he had his shorts on, only to go for a quick “breathe of fresh air”, coming back into the centre thinking better of it. Possibly for the best with his bad back.

D(Oak) – clearly played before and, after a period of warming-up, played quite well. In the absence of D(Holly) he carried the mantle of chief whinger quite well. Not in D’s class but not bad. Particularly noticeable for hitting the floor more often than anybody else on the field including a volley to the “mush” from yours truly, as well as an ongoing “mating ritual” he and J (Elm – on my team) undertook for most of the match otherwise known as wrestling for the ball. Warned both of them to “get a room” next time.

S(Elm) – a young lad who again has played a bit before. Did well and seemed to enjoy himself.

Dean (Hostel Manager) – went off like a “house on fire” off the back of his general fitness and rambling experience. Within 15-minutes he was puffing and panting (claimed chest infection), left the field and I was considering calling an ambulance for him. He duly returned to the field of play, moderated his effort this time and scored a particularly good goal towards the end much to my chagrin. Ably supported D in their efforts to barrack the referee (think I might purchase some red and yellow cards for the next game).

M(Holly) – last minute participant claiming never to have kicked a ball in his life. Yeah right…whatever! He even started slide tackling towards the end of the game. I had lunch with him after and he really enjoyed the whole experience.

B(Holly) – midfield dynamo again. Last time he slept for 36 hours afterwards, this time I forecast at least 48 hours. Went straight to bed when he jumped out of the taxi abandoning the kit bag he was in charge of and foregoing lunch.

M(Oak) – a different physical specimen since the last match. Much fitter. Think a Scouse Franco Baresi (think Italian sweeper from the 1980s who sat in front of the goalie kicking bits out of opposition centre-forwards). Personally he was my hero growing up (Franco that is and not M). See: https://www.youtube.com/watch?v=RpPrT2fpFW0

Now on to the defeated team; at least they went down with their heads held high!

J(Elm – C’s other half) – early problems with him and C (both wanted to play in net on the same team. Yes, don’t ask me??!!). Quickly settled when he was transferred unceremoniously to the opposite team. Not happy but made perfect sense as I explained to him. Indifferent performance for such a big lad. Was expecting a bit more physicality with the opposition. I’ll have to speak with Amy – housekeeper – about feeding him more steak ahead of the next game.

J(Elm) – see “mating rituals” with D above. If I hear another word from him about organising a paintball event.…… Worked hard and used his physical presence to disrupt the opposition.

J(Elm) – winger rather than a whinger but with little to no pace. Well, that’s something new if nothing else. Kept going and grew into the game. I think he originally regretted getting out of bed after I rudely woke him up about 11am, but by the end of the game I think he was starting to enjoy it and actually started to get stuck in a bit.

C(Elm) – another paintballer enthusiast! Settled well into our defence and helped out in goals as well. Steady if not inspiring. Think he enjoyed it and would play again.

D(Elm) – last time spent the entire game in net (won a prize). This time played mainly outfield and did really well.  Didn’t expect him to last but played the entire match. I think exercise would really impact him positively if we could get him to do it on a regular basis.

Bob (esteemed organiser!!!)– decided to concentrate on the refereeing this time. With his team 3-0 down after five minutes quickly became active again (suffering afterwards, trust me) and scored a few goals to keep them within “spitting distance” of a draw or undeserved win.

As is customary we awarded ‘Man of the Match’ we couldn’t choose but one, so we had two. Well played to M (Holly) who was awarded a Paris St Germain away top (very nice) for his last minute decision to come along, lie about his previous experience and work out how to perform sliding tackles without removing multiple layers of skin (he might be part lizard in my opinion). Well done to M (Oak) who was awarded a Liverpool home top (as a Manc it pains me to say it looked quite nice) for turning up and giving it a go and playing quite well. She, in turn, immediately gave it to Martin (Oak) who is a Liverpool fan. Nice touch to end the match.

After what threatened to be a “wash-out” the day seemed to go really well. Indeed, even better than last time. At some point we might well have a “wash-out” and it is difficult to legislate or plan around this happening. That said, as the old football saying goes, “you are only as good as your last game” and on that basis it went brilliantly. This however is subject to feedback from Dean, who attended, and the thoughts of other hostel managers we can organise another game in the (near) future to suit hostel budgets.

Over and out – John Motson